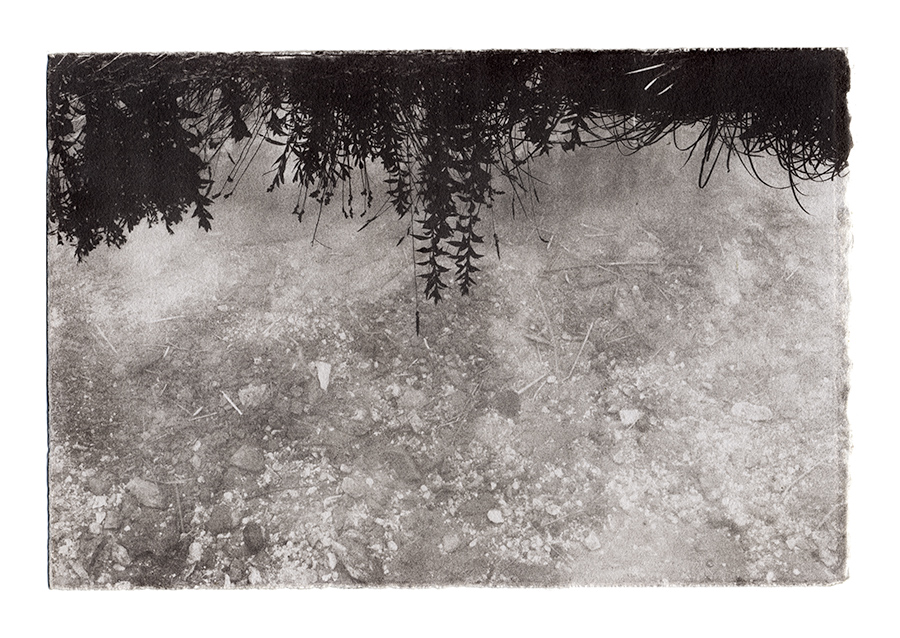 On Confluence ~ Walks down the North Fork

The North Fork Blackwater River runs past Thomas, West Virginia before joining the Blackwater proper in the canyon downstream. Thomas developed as a coal town in the early 20th Century, but as the mines were abandoned they filled with water which continues to drain into the river today. The mine void currently covers 1100 acres and discharges an average of two million gallons of water per day into the North Fork. The drainage has a pH in the 3.0 – 5.0 range and contains heavy concentrations of iron and aluminum. This water dissolves heavy metals and creates acid mine drainage, which is detrimental to river ecosystems, rendering them generally unfit for life, recreation or consumption.

The images in this project were shot during a number of walks in and around the North Fork. As most of the river is difficult to access the process required walking through the riverbed directly. The prints were made using an iron-based photographic process called the Van Dyke Print. This process uses acidic water as its developing agent, making the contaminated portions of the North Fork an ideal location for creating prints.

The works in this exhibition were processed directly in river water effected by acid mine drainage and have absorbed traces of the same heavy metals and mine runoff as the North Fork Watershed itself. 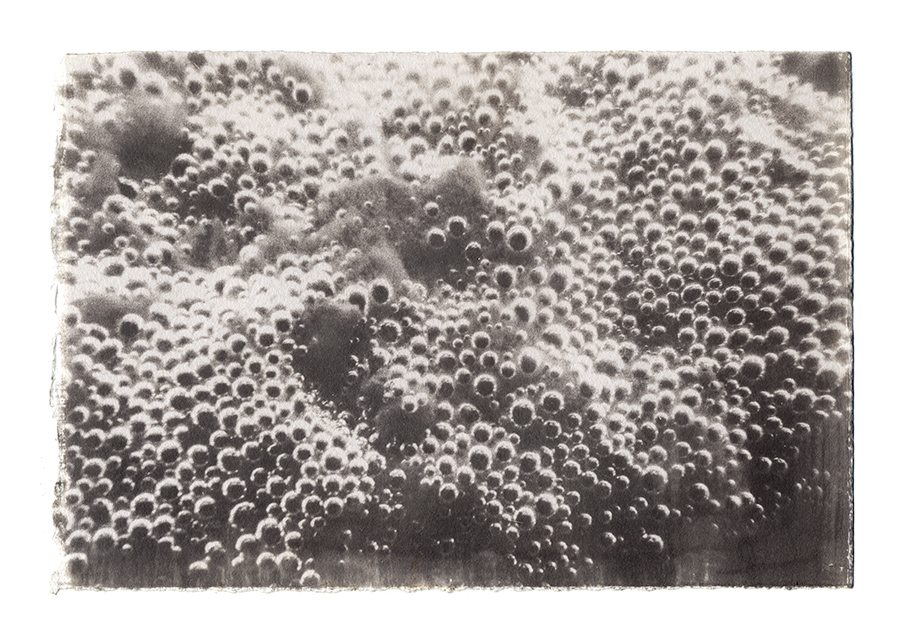 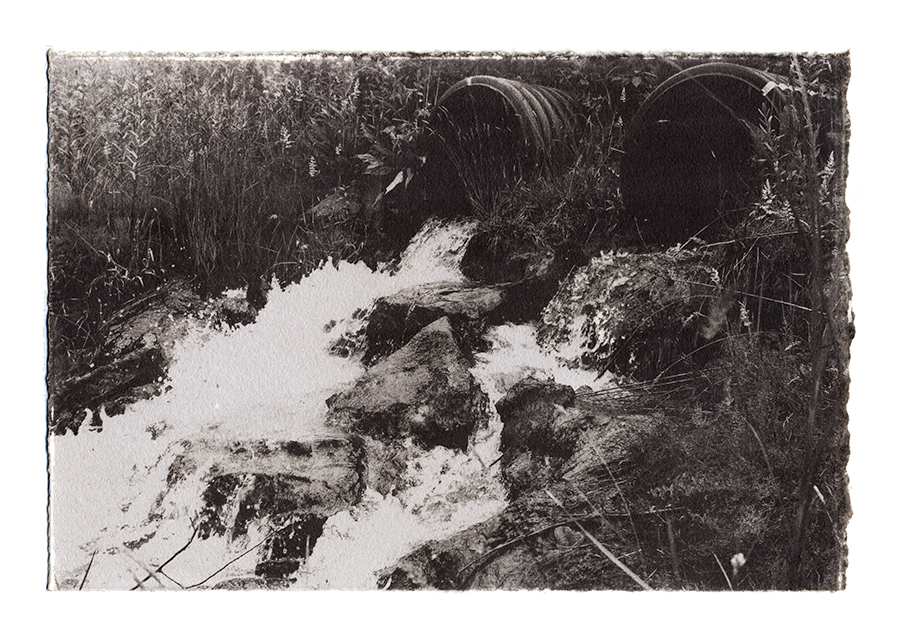 For the past four years I have split my time between the 500-person Appalachian town of Thomas, WV and the million-person city of Brussels, Belgium.  During that time the majority of my photographic work was shot and conceptualized in the urban environment and then printed and produced over the summer in my studio in Thomas.  My recent projects, ‘Maps for Getting Lost‘ and ‘Every Path is Viable‘ deal with passageways, physical infrastructure and movement through urban space.  They incorporate walking as artistic practice, GPS tracking and multi-exposure images of intersections and transit points.   While considering a project based in the landscape of West Virginia I was drawn to the river as the organic, geographic equivalent to a transit grid.  The lines created on the landscape by water are quite different than those carved out by public transportation and city streets, but they serve similar purposes for me artistically.  They provide a fixed, finite space in which to move and observe with a camera. 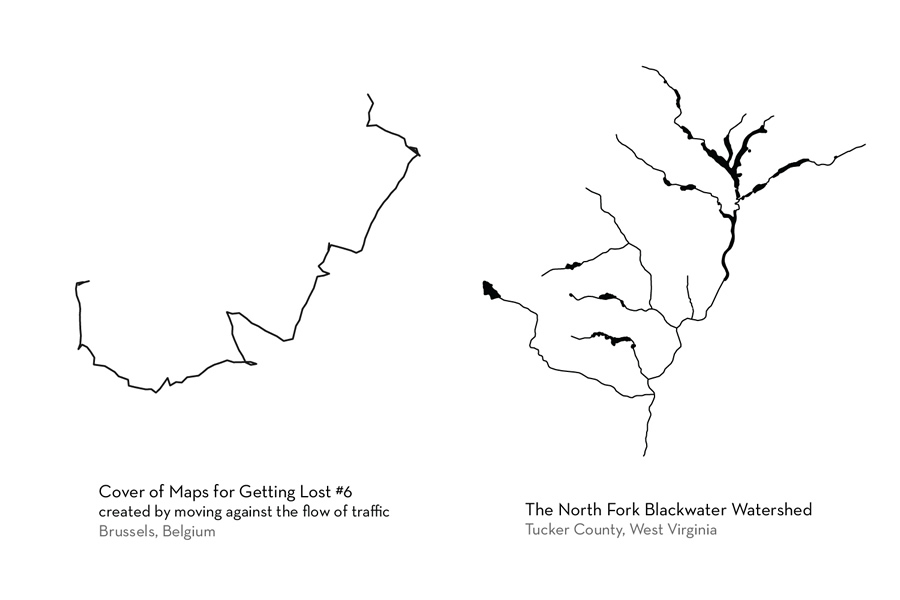 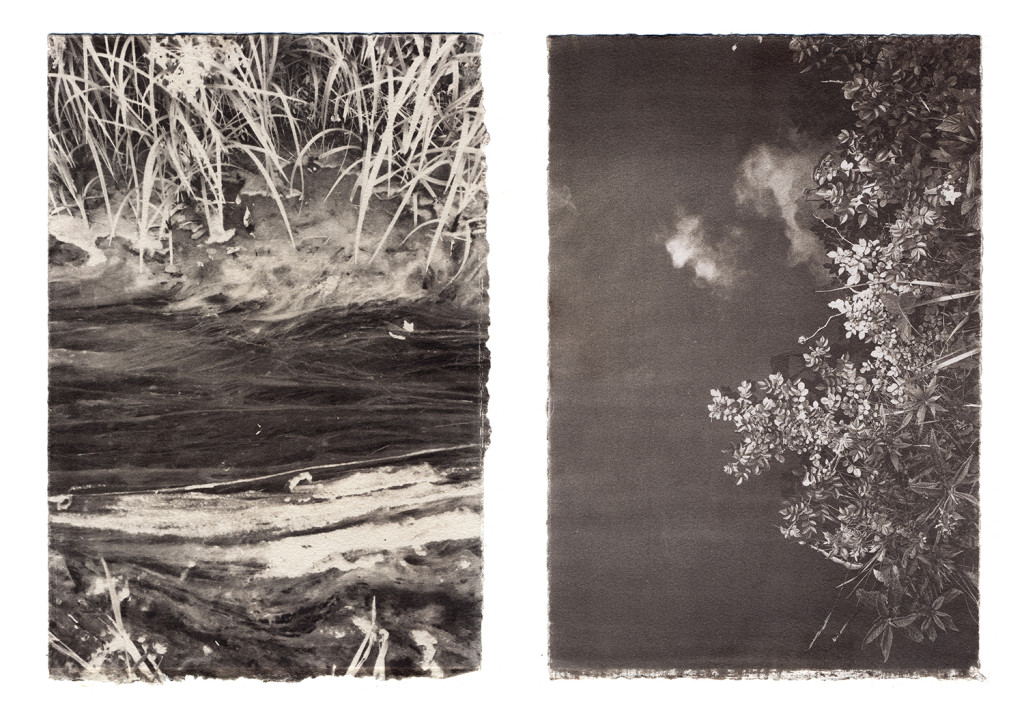 By researching the history and route of the North Fork I began to understand the immensity of the damage done to this body of water.   As is so often the case in West Virginia, the landscape here is scarred by resource extraction.  Much of the river appears clear and healthy, with little sign of impact by mine drainage, but other sections are opaque and disconcerting shades of blue-grey or orange.   I also became aware of its inaccessibility, as most of the shore is hidden within a dense growth of trees and uninviting thickets.  After many failed attempts to follow the shore I decided to walk directly in the riverbed, submerging myself in the water and engaging with it physically as my subject.  I consulted with local environmental experts to be sure the toxicity levels weren’t overtly dangerous to me. Ultimately, the photographs in this series were made on a number of day-long walks starting in the city of Thomas and ending at a waterfall downstream. 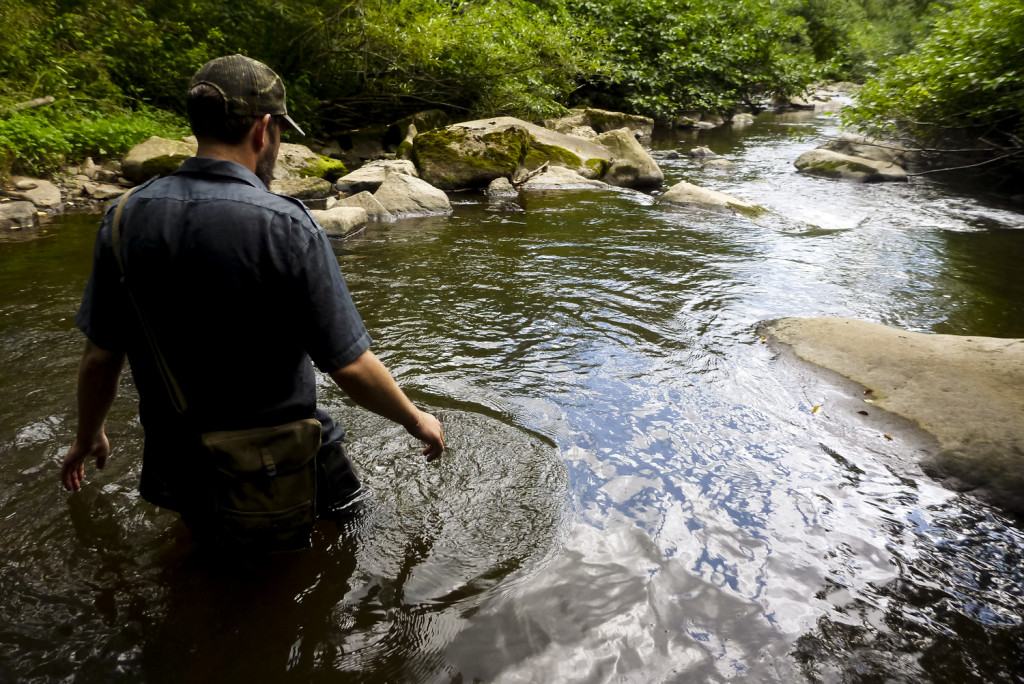 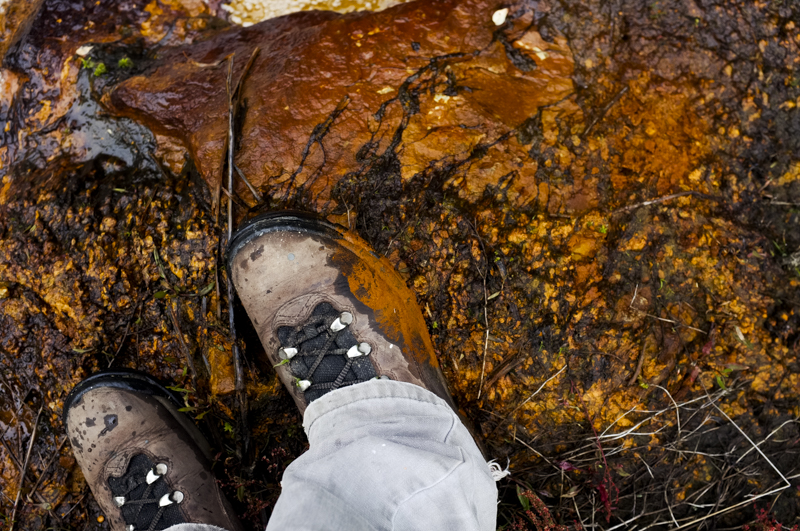 I chose to use the Van Dyke printing process for these works because it allowed me to work directly with the chemical nature of photography.  It took months of experiments with chemistry, paper, exposure and negative density to reach the result I was after.  I wanted the prints to absorb heavy metals from the water and to have a physical presence that is often lost in the presentation of photographs.  A small run of the river with the ideal pH level served as my outdoor darkroom.   I exposed the paper using the sun and developed the images directly in the river.   The prints were fixed in a solution of sodium thiosulfate, returned to the river for rinsing and then dried on the shore.  I’m curious how they will behave over time, but I’ve embraced the possibility of them shifting in color or density as they age.  They are, after all, organic objects: cotton pulp, chemistry, water and light. 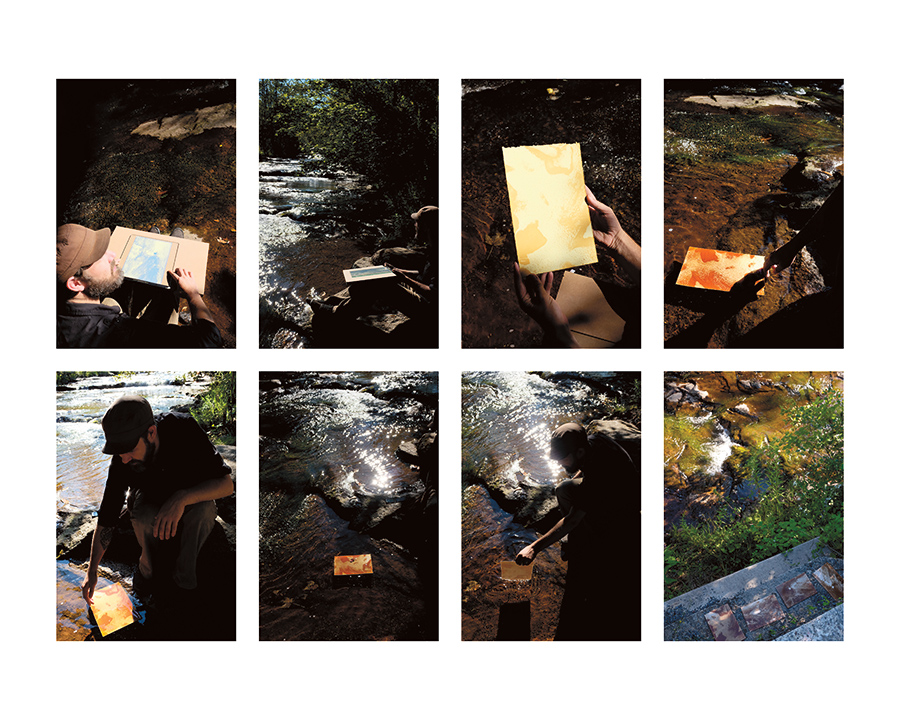 This series consists of 25 individual photographs at 7.5″x11″ and two series of photograms made in the watershed. It was generously supported by the Tamarack Foundation for the Arts.

More images can be seen on the gallery page. 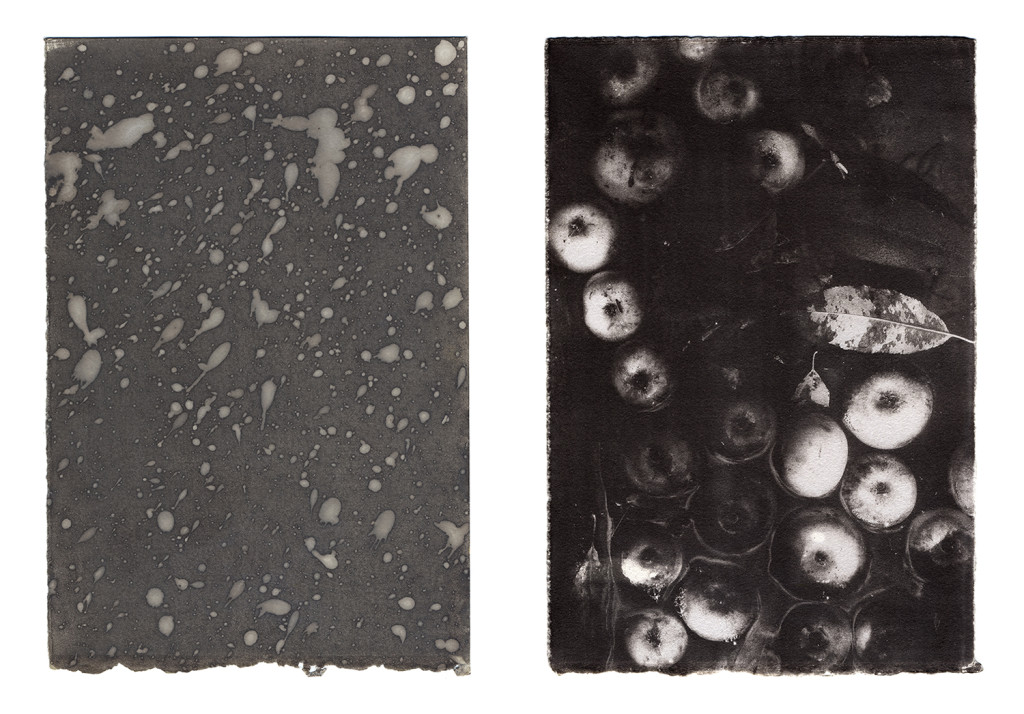